A remarkable museum in the Haus Cajeth in Heidelberg

The book dealer and art collector Egon Hassbecker (1924-2013) was interested in art that was produced far from the art market, an art by non-academically trained artists. What started with small exhibitions in a backyard bookstore in Eberbach in 1965 has been an asset to Heidelberg's cultural landscape since 1982, when the museum opened at Haus Cajeth. Following the ideas in line with the art-theoretical approach of Jean Dubuffet, Hassbecker brought together artworks beyond an established market. On his numerous trips to remote areas, he meticulously discovered artists who work completely without role models or imitating styles. He brought together life stories and art pieces of these people, who often lived in simple circumstances. Not infrequently, her biographies were shaped by war experiences and strokes of fate. Some of them had no education and remained illiterate throughout their lives.

Natálie Schmidtová (1895-1981) for example was born in the province of Tambow in central Russia. The early loss of her father forced her penniless mother to raise the children without attending school. Due to the fact that she did not know how to write and read throughout his life, Schmidtová later worked as a nanny on the Black Sea. When she met her husband, they moved to Czechoslovakia and had two daughters. In addition to working as an auxiliary worker on agricultural goods, Schmidtová also devotes herself to painting. She begins to paint landscapes from her memory. Their subjects are simple life: working in the fields, haymaking, hunting, women gathering wood, but also a Sunday walk along a lake or fun at the sea. The color of her pictures conveys carefree and cheerfulness. The artist depicts the essentials with simple means. Despite a certain playfulness in the execution, it would be a mistake to underestimate the great quality of these works. The Italian autodidact Pellegrino Vignali (1905-1884) is similar, but also completely different. Living secluded in the mountains of the Apennines, the illiterate did create his work after his retirement; he was working as a farmer. On his own initiative and without any influence from the art world, he produced drawings, pictures and sculptures of outstanding expressiveness. His archaic motifs include plants, animals and faces and emblematically reflect basic life issues. Vignali's paintings are characterized by a genuine brushwork that follows neither academic traditions nor perspective rules. Spontaneous, original, intuitive, unbiased, profound and meaningful are adjectives that would most likely describe the artist's work. Vignali never intended to live from his art. His works testify to an unobstructed view and individual style that seems to elude any descriptive attempt to explain it.

These are just two examples of an impressive collection that defines the passion of the art lover Egon Hassbecker with his special taste for the immediacy in search of the roots of creativity. But there is something that does not fit to this unique museum. The works presented here are collected under the category "Primitive Art". Although the term "primitive" was used positively and appreciatively in art science in the 18th and 19th centuries and in this sense was used by Wilhelm Uhde to characterize non-academic painters of the 20th century, the term is no longer appropriate in the 21st century. In the last few decades, the term, which is actually neutral, has been given derogatory connotations such as "at a low level of development" or "of a low cultural level". In addition, "primitive" does not remotely describe what awaits visitors to the Haus Cajeth Museum. Namely a multi-layered, complex, fascinating and unclassifiable collection. These works were created free of civil constraints and prestige pressure from autonomous, uninfluenced and unique personalities. It would be presumptuous to describe it with just one term. We owe it to Egon Hassbecker to enjoy its historical and aesthetic value. And so it would be appropriate in close relationship to the Prinzhorn Collection to give the Museum Haus Cajeth the name "The Hassbecker Collection" instead of "Primitive Painting". 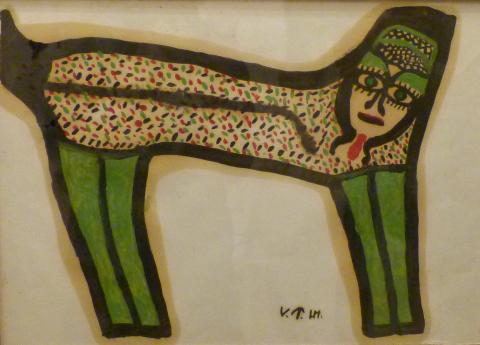